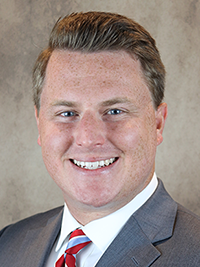 Zachary F. Brown (San Diego State, Delta Kappa ’16) is returning to staff as a Senior Chapter Consultant. Last year, he serviced our Delta and Arkoma regions and conducted the expansion project at Boise State University. As a founding father of Delta Kappa Chapter, Brown served as president, health & safety officer, campus involvement chairman, and IFC delegate. On campus, he served the IFC executive council as Vice President of Risk Management and representative to the Aztec Game Experience. Brown was additionally involved in Fraternity Men Against Negative Environments and Rape Situations as Vice President of Membership. He received his PIKE University Gold Certification at the 2018 International Convention in Richmond, VA, where he served as one of two undergraduate members on the Nominating Committee. Brown graduated in May 2019 with a bachelor’s degree in kinesiology with an emphasis in pre-physical therapy.