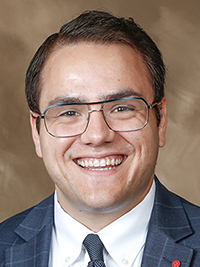 Kyle J. Pearson (North Texas, Epsilon Delta ’17) served his chapter as president, recruitment chairman, campus involvement chairman, and was a member of the IFC judiciary board. During his term as president Pearson was essential in obtaining a chapter house for Epsilon Delta. He received his PIKE University Garnet Certification at the 2020 Dallas Leadership Summit. Outside of the fraternity, Pearson served first as an orientation leader and later as a student coordinator for Orientation and Transition Programs. Pearson also served as an Academic Coach assisting in individual student development as part of the UNT Learning Center staff. He received a degree in public relations along with a double minor in political science and marketing.