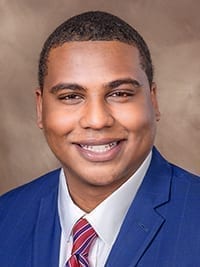 Tarik J. Terry (Old Dominion, Zeta Iota ’16), now in his second year as a consultant with the Fraternity’s staff. Terry served his chapter as president and the International Fraternity as an undergraduate international vice president in 2018-19. He achieved PIKE University Garnet Certification at the 2018 Philadelphia Leadership Summit. On campus, Terry’s activities included Student Government Association where he served as speaker of the senate, National Society for Collegiate Scholars where he served as vice president of community service; the university’s club basketball team where he served as president; and Order of Omega. Terry has interned in four political offices on the local, state, and federal levels. He is a two-time participant in the Fraternal Government Relations Coalition ‘Storm the Hill’ visits. Terry graduated in May 2019 with a degree in political science and a minor in communications.