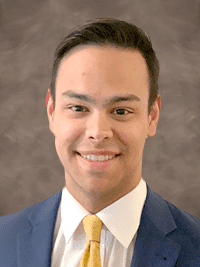 Seth C. Powers (Christopher Newport, Mu Rho ’17) served his chapter as president, master of ritual, and campus involvement chairman. He obtained his PIKE University Garnet Certification at the 2019 Philadelphia Leadership Summit. During his presidency, Mu Rho Chapter received multiple campus awards including Excellence in Leadership, and led the implementation of a new spring philanthropy event, the Firemen’s Challenge. Outside of the fraternity, Powers served on the IFC judicial board and was a member of the College Republicans and Surfriders Foundation. Powers graduated in May 2020 with a degree in cellular, molecular, and physiological biology.